A Book about Love

I could give Rob Sheffield's Love is a Mix Tape five stars merely for the sake of its title. I like the title so much because I have made many mix tapes myself. I don't recall naming my tapes like he did, but when I made my "greatest hits" as a teenager, my heart was filled with love, just like his.

I enjoyed many stories told by Rob because I can identify myself with him. I understand why he worked so hard to make the mix tape for the eighth-grade dance. I laughed when I heard he erased We Will Rock You from the tape after his mom said she liked it. I laughed harder when he complained that "the majesty of rock failed to move the girls' stony hearts" at the dance party. I found it so sweet that his college girlfriend always called him on the air and requested songs when he DJ'd an all-night radio show. I was not surprised at all when I heard statements such as "I was young, idealistic, and reluctant to learn any of the ways of the world."

But I guess music and mix tapes never meant as much to me as to Rob. Not so much because he became a professional writer for the most famous music magazine, but because:

"The first night we met, I told her the same thing I've told every single girl I've ever had a crush on, 'I'll make you a tape'. Except this time, with this girl, it worked."

Rob met a girl who loves Rock as much as he does, who was "warm and loud and impulsive." They danced to the song they both loved at their wedding. But five years after, she suddenly died of pulmonary embolism, right in front of him. I listened to Rob talking about his grief, his confusion, his own take on "Whatever doesn't kill you makes you stronger." Mix tapes accompanied him in his darkest days. I can never fully imagine his feelings, but I kind of get it. It's almost too sad to listen. So, when I got to the end of the book, it was a great comfort to know Rob met another girl, an astrophysicist who played the Stooges at NASA's holiday party. She made a mix tape for him at his birthday.

I cannot get the mix tapes I made when I was in high school because they are thousands of miles away, but after finishing this book, I went through the glove box to salvage the old mix CDs I made for listening in the car. I made these CDs in my first few years in the US, before Apple Music and unlimited streaming made music so accessible. I am going to play them in my next week's commute. I don't expect magic to happen, but it should be fun.

Stray Observations: - The book helps me to understand music from their contemporary audience's perspective. For example, it is amusing to read that Renée and Rob stared at each other after they learned from TV that Kristi Yamaguchi -- the Olympic figure skating champion -- listened to Nirvana to get psyched up backstage. "For her (Renée), it was an epiphanic moment—punk rock was now music that even figure-skater girls could listen to." - "The nineties fad for indie rock overlapped precisely with the nineties fad for feminism. The idea of a pop culture that was pro-girl, or even just not anti-girl—that was a 1990s mainstream dream, rather than a 1980s or 2000s one, and it was real for a while." 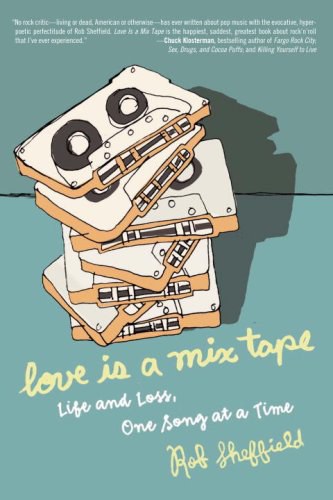