In the book Superfluous Things Clunas suggests that the when studying a material thing, people always do it in a positivism way instead of treat it as a symbolic language to convey the message about society. Material culture of things is always neglected. In this book he studies the case of the luxury objects in late Ming China and compare it to that in early modern Europe.

One important issue this book discusses is the relationship between the manufactured things of the material world and the social order favored by the literate elite in the late Ming dynasty. Texts like Wen’s Treatise have been designed mostly for spread the commodity enjoyment rather than for understand the society of Ming China. One reason is that the most articulate elites held a rigorous attitude after survived the conquest of Manchus. The social background of the flourish luxury consumption of late Ming was a society that culturally exquisite bloom but rotten inside. The elites had improperly attention to the luxury objects and pursued too much selfish aesthetic gratification while disabled in having enough unified responsibility for the nation, which result in faction strife and insubordination in the government, finally made the Han Chinese ruling class lose their authority.

Clunas suggests that the discourses of historical material like luxury goods in late Ming should not limit in aesthetic aspect. Instead, it should be considered key evidence in sketching the social change, either as one of the main force of economic growth or as the spin-off of class conflict.
有关键情节透露
转发 1
微信扫码
> Superfluous Things 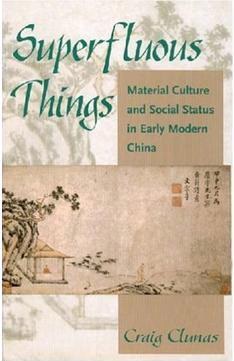