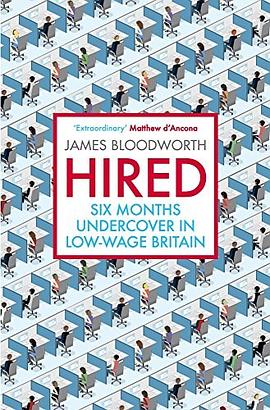 A compelling and ground-breaking piece of narrative journalism that gets right to the heart of divided Britain and its dysfunctional jobs climate.

We all define ourselves by our profession - at least to some extent. But what if our job was demeaning, poorly paid, and tedious? Cracking open Britain's divisions - immigrant/British, North/South, urban/rural, working class/middle c...

A compelling and ground-breaking piece of narrative journalism that gets right to the heart of divided Britain and its dysfunctional jobs climate.

We all define ourselves by our profession - at least to some extent. But what if our job was demeaning, poorly paid, and tedious? Cracking open Britain's divisions - immigrant/British, North/South, urban/rural, working class/middle class, leave/remain - journalist James Bloodworth spends six months living and working across Britain, taking on the country's worst jobs. He lives on the meagre proceeds and discovers the anxieties and hopes of those he encounters, including working-class British, young students striving to make ends meet, and Eastern European immigrants.

Reminiscent of Orwell's Road to Wigan Pier, this is a fascinating window onto a world that Britain's London-centric media rarely visits. From the Staffordshire Amazon warehouse to the taxi-cabs of Uber, Bloodworth uncovers horrifying employment practices and shows how traditional working-class communities have been decimated by the move to soulless service jobs with no security, advancement or satisfaction. But this is more than an exposé of unscrupulous employers; this is a gripping examination of post-Brexit Britain, a divided nation which needs to understand the true reality of how other people live and work, before it can heal.

"Potent, disturbing and revelatory... [Bloodworth] sets out to see something we should know more about than we do, and he tells the story of what he found well. —Evening Standard

"A very discomforting book, no matter what your politics might be... very good" —Sunday Times

"Grim but necessary reading... Theresa May should horrify [Bloodworth] by picking up a copy of Hired and learning from it." —Spectator

"An extraordinary and unsettling journey into the way modern Britons work. It is Down and Out In Paris and London for the gig economy age." —Matthew d'Ancona, Guardian columnist and bestselling author of Post-Truth

"Unflinching... a refreshing antidote to the fashionable post-work these written from steel-and-ivory towers. —Prospect

"A wake-up call to us all. A very graphic and authentic journey exposing the hard and miserable working life faced by too many people living in Britain today." —Margaret Hodge, MP, former Chair, Public Accounts Committee

"Whatever you think of the political assertions in this book - and I disagree with many of them - this is an important investigation into the reality of low-wage Britain. Whether you are on the Right, Left or Centre, anybody who believes in solidarity and social justice should read this book." —Nick Timothy, former Chief of Staff to Theresa May

"I emerged from James Bloodworth's quietly devastating and deeply disturbing book convinced that the 'gig economy' is simply another way in which the powerful are enabled to oppress the disadvantaged" —D. J. Taylor, author of Orwell: The Biography

"A truly devastating examination of the vulnerable human underbelly of Britain's labour market, shining a bright light on the unjust and exploitative practices that erode the morale and living standards of working-class communities." —Frank Field, MP

James Bloodworth is the former editor of Left Foot Forward, the influential political website. He is a fortnightly columnist for the International Business Times and regularly contributes to the Independent, Guardian, New Statesman and Wall Street Journal.