The Reading Response to Didion's The Year of Magical Thinking

* Note: This is an assignment essay for the course of 'British and American Essays', edited by the course instructor.

--------------
I felt like I had been punched in the stomach reading the dedication page of The Year of Magical Thinking: “This book is for John and for Quintana”. Quickly I turned to the first article anthologized in my intensive reading textbook last semester and leafed it through to where I had put a heart mark:


“We told her that we went to the hospital and were given our choice of any baby in the nursery. ‘No, not that baby,’ we had said, ‘not that baby, not that baby…’ And this with full gestures of inspection, until finally: ‘That baby!’ Her face would always light up and she would say: ‘Quintana.’"


The article, titled Quintana, is written by John Gregory Dunne, and this is my favourite scene. I had always, in John Gregory Dunne’s point of view, visualized Quintana as a chubby little angel, who, with a casual aplomb, took pride in the fact that she was an adoptada. And John’s voice-over was floating around, full of fatherly affection. It had seemed that this first impression could have lasted, probably forever, in the way that the fictional figure would neither age nor die. But there it was, the sad tidings that they both had passed away, a shock that was absorbed in such quiescence. Then I realized that Quintana was like a preparatory reading that to some degree squared me in emotion with Joan Didion, John Gregory Dunne’s wife, Quintana’s mother. “John was talking, then he wasn’t.” It was exactly the case for me, even with a dual sadness: Quintana was talking, and soon she would not be. Thereby I spontaneously followed Didion through her year of magical thinking, which, with incredible candor and sensibility, touches upon the communality of the grief and weakness yet on the sheer basis of personal experience.

Death as a subject matter is not rare in contemporary American non-fictional literature. Insofar I can recall there are Mitch Albom’s "Tuesdays with Morrie" and Randy Pausch’s "The Last Lecture". Albom relates his last visits to the moribund professor, Morrie Schwartz and the latter is an autobiographical account by the tumor-plagued Carnegie Mellon professor. Both books are poised between heartfelt desolation and subtle sweetness in retrospection, and both are very touching. But as I see it now, Morrie Schwartz and Randy Pausch were perhaps the lucky among the unlucky, because they were at least allowed the time to get prepared for the moment, to kiss the beloved goodbye and to fare the world well.

After all, there was no finale for John Gregory Dunne.

“Life changes fast.
Life changes in the instant.
You sit down to dinner and life as you know it ends.
The question of self-pity. ”


These lines that Didion jotted down after John’s death recur in the book like a refrain, stressing the keynote of the reading. Without melodramatic flourishes, her language is plain and brassy as much as the abruptness of death strikes down an individual. The strong-willed writer needs neither delusion, nor euphemism over the issue, as she exposes herself bare to the shock and lies fully engulfed in the grief of bereavement.

Nevertheless, I never felt detached while reading. The clinical tone of the book is but brittle. Surges of emotion continue to pound under the surface, whose stiffness only foregrounds her sparks of derangement. One notable signal in writing is the use of repetition:

As the New York Times critic Tony Costa notes, the cadence endowed by the repetition of the meaningless “for example” and “had needed” and “certain things” makes the writing poetic, even operatic in its own way. I find it, however, a different type of drama, for it is no more “operatic” than a murmur from a benumbed heart, a vain attempt to retain sense and break out of numbness. Sometimes she mumbles like a headstrong teenager, who believes that by recollecting every detail and examining every possibility of that day, the reel of time would have been wound back.

And sometimes, she plays hide-and-seek with memory. In the bulk of Chapter 10 Didion recounts her writing "Play It As It Lays". She wants to follow a line of thinking that will get her away from “the vortex effect”. She digs up the issue of female stars’ abortion and cites excerpts from her book. “This seemed to be working,” she comments, “I had avoided thinking for at least two minutes about why I was at Beth Israel North.” So she ventures further, into the house where she wrote the book. Then in a flash the three-year-old Quintana enters the scene, taking off Didion’s defense immediately. “There it was, the vortex.”

I love it. I love the way she says it, as if she knows it from the beginning. She wanders astray[at large], only to prove it is irresistible to be dragged back to the center of the whirl; and the best part is, she is willing to do so. She wades the dangerous water to drown herself. There seems no turning back. She wants no turning back. Because she knows it is leading her to the past, when John and Quintana were live and kicking. Going back is such a sweet sorrow.

It seems to be the point Didion wants to make that there is nothing to be ashamed of to admit our weakness, or to “dwell on the grief”, as some advocates of “the new ethical duty to enjoy oneself” may put it. Her honest, blow-by-blow record of the moments of vortex effect testifies to the attitude. And although it is completely personal, it is yet resonating.

Reading the first half of the book I could not help relating my own experience to Didion’s. Five years ago my grandmother was paralyzed due to cerebral infarction. And half a year later, when she was being transferred from the health center where she had been staying to a local hospital (because the medical insurance didn’t allow too long a stay at one place), she stopped breathing outside the ward. For a long time afterwards I had been immersed in my own magical thinking. Didion keeps John’s shoes with the subliminal belief that he would need them when he came back. I thought I would have seen my grandmother planting herself in the dim light of the streetlamp awaiting me to come home from the night tutorial session. Didion orders the autopsy report of John to be reassured that he is gone. In the emergency room I had thrust in my pocket the last roll of grandma’s electrocardiogram that had a straight line on it; but I could not find it back home. So for quite some time, I thought it had just been a dream and grandma had been just away on a trip or out for grocery shopping. If Didion solicited the ideas of “magical thinking” of the public, I would report mine: I thought of finding a “spirit medium” who can make me see grandma again -- the only problem is that as an agnostic, she might not take it seriously. Anyway, Didion deserves credit for honestly articulating the feelings and doing the beautiful job of stitching the fragments of thoughts together. It is heartbreaking to see the most privileged and intelligent among us become vulnerable to the loss of the beloved, and still heartening to think that she stays true to herself all the way and by doing so, urges us to act at the dictates of humanity.

In this sense, the book is definitely typical of the intellectual Joan Didion, consistent with her style and philosophy. As always, she stresses being “personal”, which I interpret as being “human”. It is reflected in her skepticism towards the presumptuous technological argot as well as in her preference for the literary reflection[s] on death; she often quotes poetry in the book, “the spontaneous overflow of emotion”. She refuses to be labeled and detests any action of labeling that imposes a superstructure on one’s true being. What Didion concerns [about] is the human nature, which is irresistibly defenseless in its greatest sorrow. Any try to turn the table is useless. It is because of this message conveyed by her one year of poignant thinking that I cannot identify myself with her more. 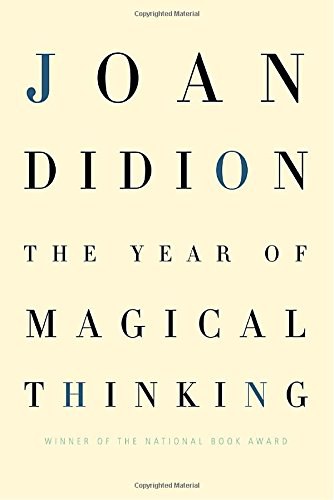