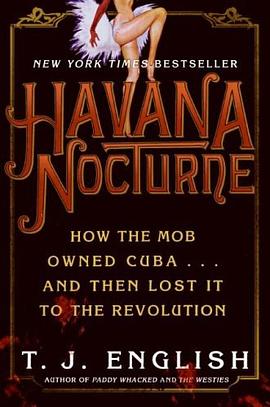 In modern-day Havana, the remnants of the glamorous past are everywhere—the old hotel-casinos, vintage American cars, and flickering neon signs speak of a bygone era that is widely familiar and often romanticized, but little understood. In Havana Nocturne , T. J. English offers a riveting, multifaceted true tale of organized crime, political corruption, roaring nightlife, revolution, and international conflict that interweaves the dual stories of the Mob in Havana and the event that would overshadow it, the Cuban Revolution. As the Cuban people labored under a violently repressive regime throughout the 1950s, Mob leaders Meyer Lansky and Charles "Lucky" Luciano turned their eye to Havana. To them, Cuba was the ultimate dream, the greatest hope for the future of the American Mob in the post-Prohibition years of intensified government crackdowns. But when it came time to make their move, it was Lansky, the brilliant Jewish mobster, who reigned supreme. Having cultivated strong ties with the Cuban government and in particular the brutal dictator Fulgencio Batista, Lansky brought key mobsters to Havana to put his ambitious business plans in motion. Before long, the Mob, with Batista's corrupt government in its pocket, owned the biggest luxury hotels and casinos in Havana, launching an unprecedented tourism boom complete with the most lavish entertainment, the world's biggest celebrities, the most beautiful women, and gambling galore. But their dreams collided with those of Fidel Castro, Che Guevara, and others who would lead the country's disenfranchised to overthrow their corrupt government and its foreign partners—an epic cultural battle that English captures in all its sexy, decadent, ugly glory. Bringing together long-buried historical information with English's own research in Havana—including interviews with the era's key survivors— Havana Nocturne takes readers back to Cuba in the years when it was a veritable devil's playground for mob leaders. English deftly weaves together the parallel stories of the Havana Mob—featuring notorious criminals such as Santo Trafficante Jr. and Albert Anastasia—and Castro's 26th of July Movement in a riveting, up-close look at how the Mob nearly attained its biggest dream in Havana—and how Fidel Castro trumped it all with the Cuban Revolution.